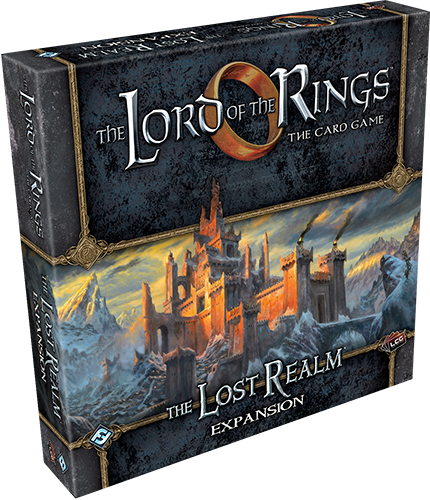 The Lost Realm is finally here! Join forces with the Rangers of the North to help fight against the forces of Angmar. This release includes the censored cards for the whole expansion, as well as normal and easy-mode versions of each of the 3 quests. The Image Pack is slated to drop in October later this year.

Note: There is currently a bug that you may notice when a Side Quest is dealt as a shadow card. The image of the facedown shadow card will be stretched and oriented vertically. I am working on a fix for this. 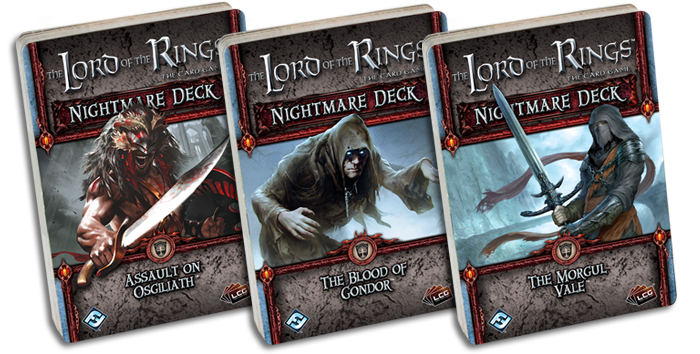 The Nightmare decks for Heirs of Numenor and all six Against the Shadow quests are now available!  Now you can play once more through the entire cycle, but this time the challenges are greater, the enemies are deadlier, and the treacheries run deeper than ever before…

This update also brings with it the latest quest from Ian Martin of Tales from the Cards. Following up on his epic First Age custom deluxe expansion, this new quest, Trial Upon the Marches, is the first AP in his Doom Mastered Cycle. Make sure to re-download and install the Custom.o8c Image Pack to get all the card images for this quest.

Speaking of Image Packs, the Nin-in-Eilph, the Road Darkens, and the Hobbit: On the Doorstep – Nightmare are now available. Get ’em while they’re hot!

No new product releases this month (not yet anyway), but the image packs for The Dunland Trap and Nightmare Khazad-dûm are now available. Furthermore, there have been some recent updates to OCTGN that now allow us to have proper cardback images for Encounter Cards! All Enemies, Locations, Treacheries, and Objectives have been given the Encounter cardback image. This change will be most noticeable when adding shadow cards. With the recent release of the Antlered Crown AP, the Ring-maker cycle reaches its conclusion! Censored cards have now been added to OCTGN, along with the Quest Deck and its Easy Mode version. As explained in the rulesheet insert, the Raven deck has been pre-constructed and put into the Secondary Encounter deck located in the Global Tab in game. These two piles start minimized, but you can click on the icons for the Secondary Encounter deck and its discard pile (their icons have a “2” over them) to expand those decks to full size. Just remember these two keyboard shortcuts:

Just remember to discard cards to their original deck. Regular Encounter cards can just be ‘deleted’ as normal to discard them, but the Dunlending Raiders and Warriors must be dragged to the Raven deck discard pile (simply hitting Delete will put them in the Encounter Discard pile, which is NOT where they belong).

With the release of The Old Forest a few weeks back, it’s finally time to add these quests to OCTGN! Each of these quests can be played as standalone quests, or in Campaign Mode right after A Shadow of the Past. The Image Packs for these quests will be released in June. The race to the forge is on! This latest update adds support and the censored cards for Celebrimbor’s Secret — the 5th Adventure Pack in the Ring-maker cycle. Card text will be revealed in February, with the Image Pack to come in May of 2015. This release also brings the card text for The Three Trials and the Trouble in Tharbad AP’s. The The Nîn-in-Eilph was recently released by FFG, so go pick it up at your FLGS! The censored cards are now up on OCTGN as well, as are the normal and easy versions of the quest decks. This quest features 3 copies of Stage 2, and 3 copies of stage 3, so the random number generator will come in handy when you need to advance to a random stage! The Nightmare decks for On the Doorstep were released in the fall Game Night Kit, and if you were lucky enough to get your hands on a set, then you can now play them in OCTGN. The censored cards have been added to the latest update, making Smaug and the Battle of Five Armies even more terrifying. The long-awaited saga expansion The Road Darkens is finally upon us! You can now continue your campaign from The Black Riders, assisting Frodo in his journey through the second volume of the Fellowship of the Ring. This release contains the censored cards and FOUR versions of each of the three quests: Normal, Campaign Mode, Easy, and Easy Campaign Mode. The image pack will be released in April 2015. A note about the Campaign Quest decks:

In the folder: “DecksLord the Rings – The Card GameQuests”, you’ll see the Campaign decks at the top of the list. I have renumbered these decks for simplicity (i.e.: the Black Riders quests are now simply 1, 2, and 3). However, you’ll notice that the old numbered Black Riders quests still remain (34, 35, and 36). That’s because OCTGN doesn’t delete files when updating (this is to ensure your own customized decks are kept safe). So, in order to keep your deck folder looking clean, feel free to delete the following Decks:

And speaking of Campaign Mode, I’m sure many of you are already aware of the Campaign.o8d deck that resides in the DecksLord of the Rings – The Card Game folder. Be sure to make a copy of that deck somewhere for your own Campaign so it doesn’t get overwritten in future updates. This deck is a great way to store your current “Campaign Pool”, keeping track of Boons & Burdens you’ve earned. Simply edit this deck each time you complete a Campaign Quest, and load it back up next time you Continue your campaign!

And finally, the Image Packs for the Nightmare versions of The Hobbit: Over Hill and Under Hill and the final 3 Quests from the Shadows of Mirkwood Cycle are now available! Head on over to the Image Pack page to download them. And just like that, FFG has released the remaining 3 Nightmare quests from the Dwarrowdelf Cycle. These quests are now ready to play on OCTGN, albeit with censored cards of course. Image Pack to arrive next March, 2015.

I also wanted to let you know that Splat’s OCTGN Deck Converter Plugin has recently released version 3.4.0. This outstanding plugin has support for a wide variety of games on OCTGN, including LOTR. You can now easily import decks from CardGameDB or from text lists. Download it here:

Once downloaded, make sure OCTGN is closed, then install the program. Now open up OCTGN, go into the Deck Editor, and under the Plugins menu click on OCTGN Deck Converter. Choose your game, then either select Webpage or Text from Clipboard. If you’ve chosen webpage, then copy/paste the url from a deck page on CardGameDB (or the ‘share’ link from one of your own personal decks). Alternatively, if you see a decklist in a forum somewhere, simply copy that text and use the Text from Clipboard option to paste it in. You can now review the plugin’s interpretation of what you’ve entered, including choosing between different versions of named characters if need be. Finally, you can load the deck back into the Deck Editor, where you can save it for use in game!